​Historical painting genre is a reflection of social developments and struggles, the most prominent, influential figures of that era, and battle scenes. Almost all paintings in historical painting genre contain a detailed narrative and a complex plot conveying not only a state of absolute static, but also a sense of temporal development, emotional intensity of the moment and the instantaneous transient situation as well as the effect of movement changes (due to the special rhythmic organization of the image, the dynamics of color, light and shadow, composition, lines, strokes and etc.) Artists evaluated historical events and expressed their attitude to them in accordance with the philosophical, ethical and aesthetic principles of that era. The historical and cultural experience of the past helps to solve the problems of today’s world by examining the events and the key players. This genre of painting appeared for the first time during the Renaissance but in the 18th century due to an increasing social role of historical painting style had returned and held an educational as well as a political significance. 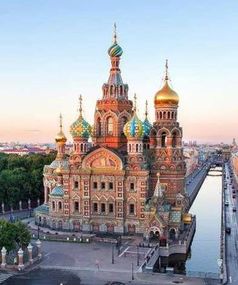 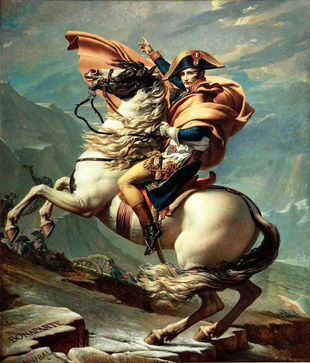 My first choice of French painter, Jacques-Louis David’s works is Napoleon Crossing the Alps. Jacques-Louis David was a passionate supporter of the French Revolution and Napoleon’s First Artist. One of the most iconic historical paintings has become Napoleon Crossing the Alps. The work is neo-classical, because it refers to the antiquity equestrian portrait and modeled to a classical ideal. As important as the Church of the Savor on Blood is important to Russia, Napoleon Bonaparte remains to be an iconic figure in France. In the Encyclopedia of the Romantic Era, 1760-1850, Christopher John Murray states that King Charles IV of Spain commissioned the painting for “… in recognition of the young commander’s notable victories and rise to power, and as homage to a powerful ally. It provided the definitive image of the warrior ruler that publicity-conscious Bonaparte was then eager to promote.”(785). David saw Napoleon as a national conquering hero. At the same time, 11 Napoleon wanted to make a prototype magnified the Napoleonic propaganda. David wanted to portray Napoleon sitting on a horse. However, that pose Bonaparte refused, citing the fact that few people are interested in real similarity is sufficient to express the essence of genius. The reality, Bonaparte was a poor rider. He crossed the Alps on a mule wearing a gray coat and suffered from sickness during the journey in the mountains.
​In the painting, we see Napoleon mounted on a horse, a symbol of strength and a noble naturalness. The composition of the painting is dynamic: the body axis of the prancing horse and the axis of the body of the rider form a strong cross. The horse and Napoleon stand out as if they are a carved image on the background of the cold gray- blue sky and snow-capped mountains. Napoleon is charging through the Alps on his white horse. That moment is frozen in the painting.
In the painting we see names engraved in the rocks of those who successfully crossed the Alps: Hannibal during the Second Punic War, Charlemagne in 773, and Napoleon in 1800. A viewer seen Napoleon Bonaparte lit up from the front and pushed by the wind under the gloomy sky. The sun is seen as it is about to break through the cloud right above Napoleon’s finger. This would have been a clear message of the future of France under Napoleon. The French army is in the background, pushed by the French flag winds like an invincible force. The dominant colors used are those of France: blue (the sky), white (Napoleon’s horse), and red (Napoleon’s cape). ​​
In conclusion, you have been introduced not only to historical paintings and a landmark but with artists who created them. Jacques Louis David captured the spirit of Napoleon Bonaparte and his dear friend, Jean-Paul Marat, Ilya Repin captured everyday struggles of Russian people in the Barge Haulers on the Volga, Vasnetsov’s portrait of Ivan the Terrible one of the famous tyrants, and was a part of a team that built an absolutely majestic the Church of the Savior on Spilled Blood. Historical painting genre is important to us because the artists created this art 13 form and left us a glimpse of what challenges did people and the artist himself/herself had to face. Essentially, historical painting genre is storytelling of the times that had gone by. As a viewer, events from so long ago can teach us a lesson that history repeats itself. Therefore, it is our duty to preserve and protect art and the buildings that play a vital role in passing that piece of history to a new generation and not turning a building like the Church of the Savior on Spilled Blood into a dumping ground for the Small Opera House or a vegetable market.
Works Cited
Adlam, Carol, and Juliet Simpson. Critical Exchange: Art Criticism of the Eighteenth and Nineteenth Centuries in Russia and Western Europe New York: P. Lang, 2008. Print. Bolton, Roy.
​Views of Russia and Russsian Works on Paper. S.l.: Sphinx, 2010. Print. Bordes, Philippe, and Jacques Louis David.
Jacques-Louis David: Empire to Exile. New Haven: Yale UP, 2005. Print. Chamberlain, Lesley.
​Volga, Volga: A Journey down Russia’s Great River. London: Picador, 1996. Print. Cohen, Aaron J. Imagining the Unimaginable: World War, Modern Art, & the Politics of Public Culture in Russia, 1914-1917. Lincoln: U of Nebraska, 2008. Print. Figes, Orlando.
Natasha’s Dance: A Cultural History of Russia. New York: Metropolitan, 2002. Print. Howard, Jeremy, and Yuri Belinsky.
National Geographic Traveler. Washington, D.C.: National Geographic, 2007. Print. Hugues, Robert P.., and Irina Paperno. Christianity and the Eastern Slavs. Berkeley (Calif.): U of California, 1994. Print. Johnson, Dorothy, and David.
Jacques-Louis David: The Farewell of Telemachus and Eucharis. Santa Monica: Getty Museum, 1997. Print. Murray, Christopher John.
Encyclopedia of the Romantic Era, 1760-1850. New York: Fitzroy Dearborn, 2003. Print.
Repin, Il a Efimovi , Grigori Jur evi Sternin, and Wjatscheslaw Schewjakow.
Ilja Repine. Bournemouth: Parkstone, 1996. Print. Smith, Anthony D.
The Nation Made Real: Art and National Identity in Western Europe, 1600- 1850. Oxford: Oxford UP, 2013. Print.
Sternin, Grigori. Ilja Repin. Bournemouth: Parkstone, 2001. Print. “Welcome to St. Petersburg!” Saint-Petersburg.com. N.p., n.d. Web. 25 May 2014. Efremova, Liudmila Aleksandrovna. Moskva: “Olma Media Grupp”, 2010. Print